Goodbye Shea (and Yankee Stadium, too)!

Two weeks ago, I took a trip to the big city to bid farewell to the home ballparks of my Mets and that other team in New York. Here we are, sans my brother (he took the picture and is prohibited from appearing here until he contributes to this blog), at old Shea and new Citi Field. We were excited about the upcoming 7 hours of Mets v. Braves BASEBALLDAMONIUM!!!!!!! 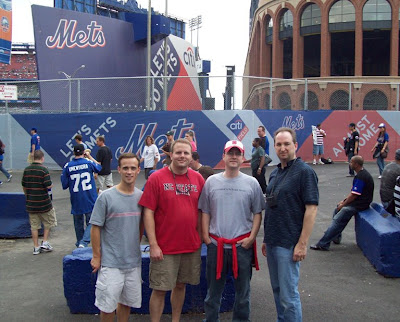 The Mets wall of retired numbers is not the most impressive such wall in New York:

SHEA - Lawyer who helped bring Senior Circuit baseball back to New York. Ehh!
37 - Casey Stengel - First manager of the Mets, Great manager for the Yankees. Not as Ehh!
14 - Gil Hodges - Played his final 2 seasons w/ the Mets, Managed the Mets to their first World Series in 1969. Warmer!
41 - Tom Seaver - The only great Met until Piazza. YES!
42 - Jackie - Brooklyn Great. 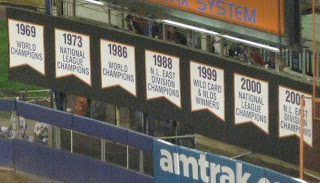 The Mets tanked it last year because their is no more room in Right Field for any new banners. Surely there will be room for more at Citi Field. Just maybe not for a 2008 banner. GO METS! 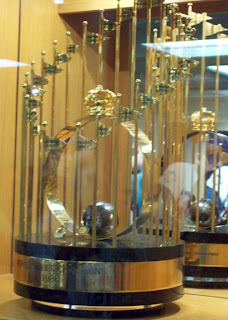 Proof that the Mets won 2 World Series: The 1986 World Series Champions Trophy. You can even see the 1969 version right behind it. In the same display case, there was a bust of Mookie Wilson. (Remember when there was a Mookie joke in every David Letterman Top-10 List. Too bad Joey Buttafuoco and Jeff Gillooly ruined Mookie's time in the limelight.) 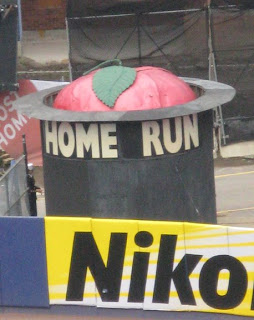 The homerun apple is tiny. I almost picked it up and ate it but there is little to no running water at Shea so I couldn't rinse it off.

How can you make a bad stadium from the 60's less classy? 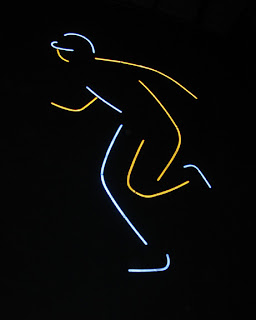 Put neon-lighted baseball players on it.

Soon, Shea will be put to bed and the Mets will enjoy the friendly confines of Citi-Field: 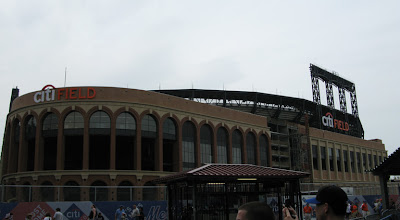 WOW! That is a gorgeous stadium. It is going to be fantastic. Check out how much it looks like Ebbets Field.

Johan pitched a great game 1, only to have the bullpen give away the game. The bats were no help either as the Braves won game 3-2. The bats woke up for game 2 as Wright, Reyes, and Beltran homered while rookie pitcher Niese picked up his first career win. Mets win 5-0.

A whole day of baseball wore us out. We trudged down the back-and-forth walkways of Shea, got on a bus (which I believe actually picked ALL the fans at once), and headed to the hotel for the night. My friend David held Snorefest 2008 in the bed next to mine so sleep was fitful at best. (On a positive note, his wife now only needs 2 more miracles to be considered for Sainthood. She must be a good woman.)

The next day we were off to the House that Ruth Built, or some 70's abomination of the Babe's old crib. 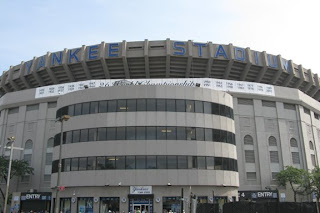 They let about 7 people into monument park 3 hours before the game. It gave us non-snoring, non-Yankee fans even more reason to hate the Blankees.

I must admit that their wall of retired numbers is ridiculous: Ruth, Gehrig, DiMaggio, Mantle... Casey Stengel is there too. He managed the Yanks to 7 World Series Titles. Bernie isn't on the wall but they haven't used his number since he "retired" a few years back. 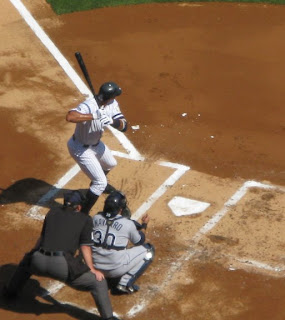 ARod hit a grand slam after the first 3 Yankees reached base to lead off the game. Jeter tied Gehrig's record for most hits in Stadium history. He had 9 hits in 3 games to tie the record just for us. The Yankees won the battle but the Rays are winning the War! (Don't you hate when people liken sports to war? Me too.) 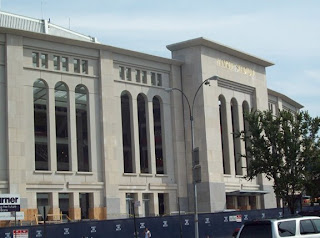 New Yankee Stadium looks good too. Not as good as Citi Field but I look forward to seeing a new version of the original stadium. I can only assume the New York Post will christen this one "The House that Cap'n Jetes Built."

The trip was loads of fun. The five of us often broke the New York City rule of not talking on the subway but managed to avoid buying any bootleg dvd's or knock-off handbags. This year I'll be saving up the pennies for a trip to Europe next summer. I might be up for a day trip to see the Nationals and their new park. (The only stadium worse than Shea or Yankee Stadium is RFK!)

I'll leave you with a bit of hilarity from the streets of New York City. This little shop, which opened later that day, was called "99 cent Dreams." A dollar store in New York? Nope! Check out the small print: "Everything $1 and Up." Even dreams cost more these days! 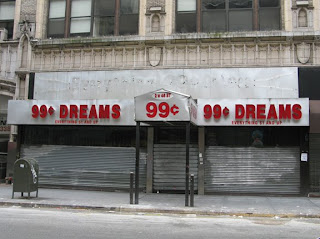 I 'll be dreaming of a 2008 playoffs that includes my favorite team, the Mets.
Posted by mmosley at 10:25 PM No comments:

Don't you just love GOOGLEY EYES? They make everything cuter. The sticker book I had as a kid had a special page just for stickers with them. For those of you who have no idea what I am talking about, these are googley eyes: Now what do googley eyes have to do with 1985 Donruss?

One day back in 1984, a strange man in dark slacks and a white shirt unleashed a swarm of those cute little eyes on Terry Francona and the unsuspecting Montreal Expos. Did the googley eyes have any effect on the Expos or anyone else?
1. Francona went on to have the best season of his playing career, batting .346 in 58 games.
2. Gary Carter and Charlie Lea were the starting battery in the All-Star game.
4. Several Expos fans got a severe case of the googley bends, a rare side effect of staring directly into a googley eye. Kids can't get 'em, only lame adults with no inner child.
4. The Expos still finished in the cellar. According to the back of this card, it's worth 10 cents. Here's some 10 cent Expo trivia:
The Expos only make the playoffs or finish first during strike shortened seaons. In 1981, the Expos finished first in the first half of the year thus making the playoffs in the wacky true birth of the wild card. They lost to the Dodgers in 5 games. In 1994, the Expos were well on their way to winning the East for the first time. The strike ended their run and management had to sell off all the young talent. I guess the current Expos, the Nationals, need a strike-shortened season rather than googley eyes if they ever hope to play in October. In this picture, he didn't actually use his bat to hit the ball. He used his "bionic elbow. Horner was the first pick in the 1978 draft, went directly to the majors and hit a home run off of Bert Blyleven in his very first game. 218 round-trippers in 10 seasons is a nice career. He hit 31 homers in Japan then left baseball after an injury at the age of 31.

'I never thought I was going to walk a !@#$% jockey,'' Guillen said of the 5-7 Pedroia, a player he actually admires. ''Walking a guy who just came from being on top of Big Brown. Right now, he's on a roll. This guy right now is on fire. No matter what you throw up there, he's going to get it. I can't believe you can change professions in one year, go from the Kentucky Derby to the Boston Red Sox ballpark.'' 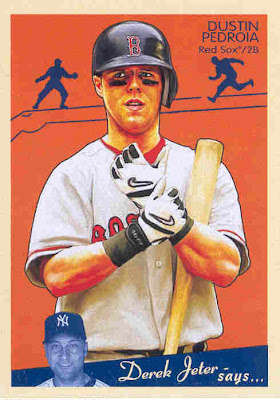 Ozzie Guillen is hilarious and Dustin Pedroia is a pretty good ball player.
Posted by mmosley at 9:15 PM 1 comment: