I present to you the mysterious Steve Renko player card from 1981, Fleer edition: 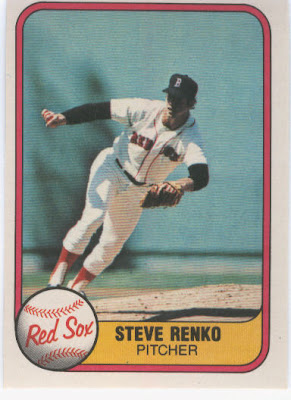 You may be asking yourself, What is that "thing" behind Steve? Here are a few possibilities:

1. What's left of the bomb that has just toppled Steve Renko. (He's falling and falling fast.)

3. Evidence that Jim Rice spontaneously combusted during a game. (Then came back from the dead?)

4. Maybe it was Yastrzemski practicing for his now defunct Vegas magic act.

5. The shadow of the tree that was planted as a memorial to the Bucky "freakin" Dent baseball. (Like goal posts and Yankee monuments, trees should not be in the field of play. Neither should weird sloping hills. I'm looking at you, Houston Astros!)

6. God, in an updated burning bush, letting the Sox fans know that there time will come.

7. Rick Burleson was a shape-shifter.

9. Fleer was being metaphorical: When Renko pitched, Fenway became a war zone. (Steve was 9-9, average at best, but not terrible.)

10. This was the precursor to the 1989 Billy Ripken card. The rare original has Glenn Hoffman flipping the double bird right at the camera. This more common version shown here is referred to as the black smoke version. I have heard there is a version where Hoffman is behind a big black box. Other versions include a scribble and Hoffman's birds replaced by "thumbs up".
Posted by mmosley at 7:41 AM 6 comments: