Since I am in a hotel, NOT being paid for by my insurance company, I decided to check out my draft folder from quite a while ago (Oct 2008). I never finished my 1981 Fleer Team by Team tribute. Apparently, it's Expos time! 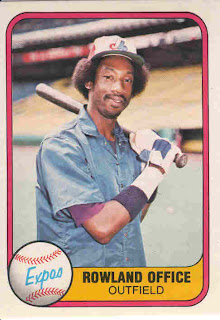 Rowland has a few things going for him.

1. Sweet Name: Rowland Johnie Office. Even his middle name is cool.
There is a Brave-centric blog, Rowland's Office. Clever use of a good name, but much too Brave-ish for my delicate Met sensibilities. book

2. Afrotasticness: I am pretty sure that is a word.
His Expo hat may be hiding a giant bald spot between two Afro-Puffs.
OR
Rowland has a full-size Afro, part of which fits neatly under said Expo hat.
Either way, any Afro is alright in my .

3. Style: XL wrist bands & jacket
His nylon jacket could mean he just finished the day shift at Leon's Barber Shop or he is about to bowl a few frames at the Montreal Bowl-A-Rama. The wrist bands say he is a sweaty man's man!

The Expos finished 1 lousy game behind the World Champion Phillies in the NL East. Oh well, the Expos are now the Nats and until they put a decent team on the field, no one will care.

True Confessions of a Collector

I thought I would share a few shameful tidbits about myself as a collector:

1. I am a Mets fan. (NO, THAT"S NOT THE SHAMEFUL PART!) As a Mets fan, I hate the Atlanta Braves. And I am beginning to hate the Phillies just as much. Here is where it gets shameful. Mets fan, Braves hater, thus I must also hate Chipper Jones, who ruled Shea more than any hitter. I have 52 different Chipper Jones cards. 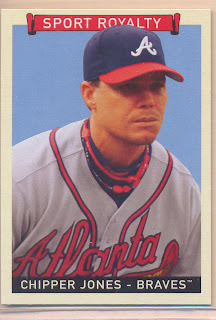 WHY? I have always been a "general collector". I love baseball and have always used my card collection to chronicle the MLB. Chipper is a great playerand I like having great player's cards. Now, I don't go out of my way to get more Chippers but I have only recently considered trading some of them for cards of players I like more. Larry isn't the only player I could have used as an example. The same is true for any superstar for the past 20 years.

2. I have thrown away thousands of cards. I admitted this long ago and was quickly told to send them to collectors across the nation. Since the initial tossing, I have sent around 20 thousand cards to new and loving homes. I think I have made up for my transgressions for this one.

WHY? I had too many cards. I had every set from 1986 to 1991. EVERY SET! I never looked at them. There were boxes and boxes of cards I didn't need or like. My card collection gets better and better as it gets smaller and smaller. I still have too many cards. Now I usually make myself get rid of a card before I allow a new card into my collection. No, I am not throwing the excess away. They will be sent out to collectors when I recover from the shipping cost of my last giveaway.

3. Here is the big one that may get me shunned from the blogging community. I sort my cards based on Beckett book value. Some cards are in individual, hard, plastics holders, others are in binders, some in penny sleeves, and others in the raw. I have never made a trade based on it, nor do I believe that it means anything but its a way to interact with my collection like I did when I was a kid. 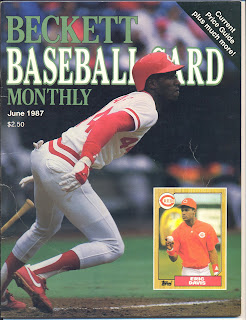 WHY? As I said before, I have always been a general collector. I have always had my favorites but I used to want to collect EVERY card. You have to sort them in some way. Now that my collection is getting more refined, I may stop this practice. But I might not. Why should you care that the B-WORD gets a little of my money every once in while?

There you have it. True confessions. Come get some Lame Hits. The last 7 posts are filled with them.
Posted by mmosley at 9:00 AM 5 comments:

HEADBAND!!!!!!!!!
It's the card I (and possibly the Dean Family) have been waiting for. I'll save my commentary until after you are awed by the first, but not the last, headband of Tito Fuentes! 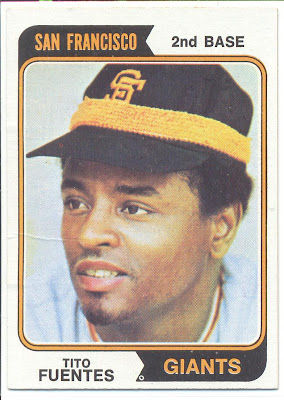 After 8 years in the league, Tito is finally coming into his own. He is willing to step out from the pack and show some of his personal style.

Possible reasons for the headband:
1. Tito's hat often pops off due to his blinding speed and large afro hairstyle.
2. Men just don't have enough accessories. The ladies have purses, jewelry, shoes, etc and no team would allow cuff links on uniforms, except maybe the Chicago White Sox. (They will wear anything!)
3. Fuentes sweats a LOT, through a headband, his hat, and then his hat's headband.
4. He is cool and isn't interested in explaining it to losers like you and me.

Stats on the Back! 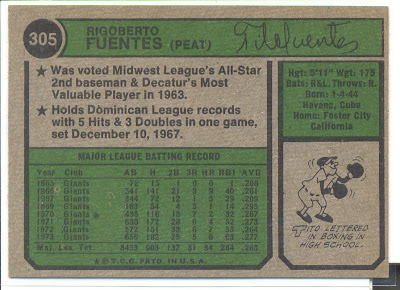 In 1973, Tito Fuentes cards begin to get EPIC. '73 is famous for it's fake poses and super-wide angle action shots that feature 3 to 5 players, anyone of whom could be the player whose name appears on the card. Here is the front of card #236: 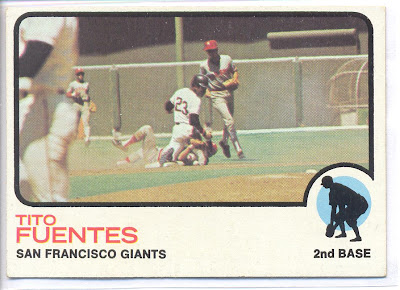 That's Tito, number 23, with his knee in in that poor guy's chest. He stole a career-high 16 bases in 1972. With this kind of intimidation, he probably could have stolen a lot more. 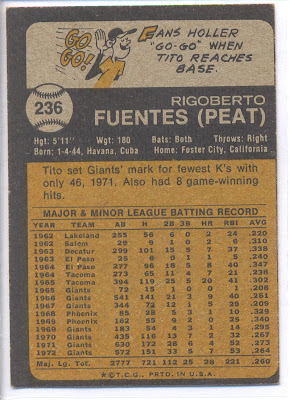 Here's the new stuff we learned about Tito Fuentes:
1. Fans holler "Go-Go" when Tito reaches base. (I didn't think anybody hollered in San Francisco. I thought it was just a southern thing.)
2. Another solid season for the 2nd baseman: .264 avg, 7 HR, 53 rbi
3. The full name is back after a 2 year hiatus, Rigoberto (Peat) Fuentes!

Left Field is a strong position in the best ever debate. The top 3 are baseball immortals as are many who didn't make the cut. Here's my list: 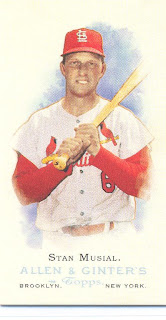 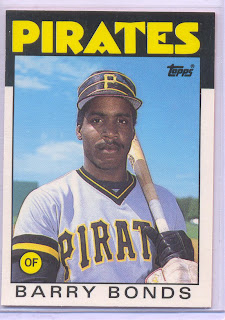 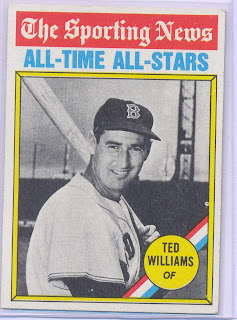 Others who were considered:

Monte Irvin - Hard to say, didn't get his shot in MLB until he was 30

Tim Raines - underrated because of playing with Rickey

Current players who have a chance to make the list:

Ryan Braun - now that he has a position (his tenure at 3rd base was awful), Braun has had an excellent first three years of a career, will hit 30+ HR in his first 3 years, 142 OPS+, ROY, 2 All-Star teams, some MVP-voting love. Time will tell.

Those of you jonesing for some Tito. TOMORROW!!!
Posted by mmosley at 10:33 AM 3 comments: