Where have you gone Topps Turkey Red?
Me and my bro turn our lonely eyes to you.
What's that you say, Michael Eisner?
Just three years and it's gone away.
Hey, Hey, Hey.
Does anybody but me and my brother wish this set was back this year? 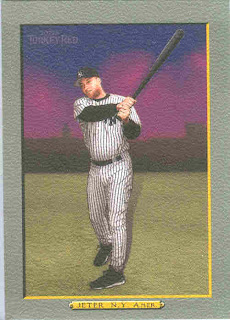 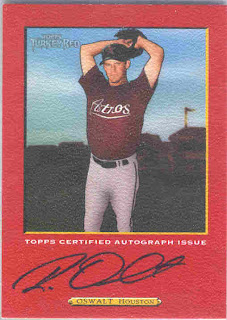 and the sweet Dick Perez paintings of 2007. 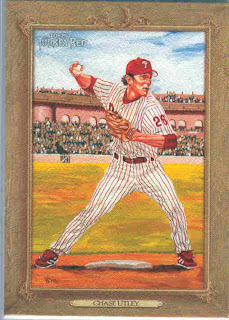 Maybe Topps is planning a surprise December release!
Posted by mmosley at 10:57 AM 4 comments:

Professional athletes these days don't seem too concerned about all those future fans out there, the KIDS. F-Bombs riddle the airwaves on and off the field. 1984 was a more civil time in sports. Gentlemen played the game. One of those gentler men, Rafael Ramirez! Here he is, doing his part to shield the eyes of children everywhere from the horrors of his unmentionables. Ramirez wasn't great but his glove kept him in the league for 13 seasons. He made one All-Star team in 1984 and even received multiple MVP votes in 1983. According to Baseball Reference, Rafael is statistically most similar to my new favorite player from the 70's, TITO FUENTES.

If only Ramirez was quick enough to cover Billy Ripken's bat a few years later.

Next Up: Mets cards in my mailbox!
Posted by mmosley at 4:19 PM 1 comment:

What is Kurt Bevacqua doing in this 1985 Donruss card? I have a few ideas! 1. Proclaiming himself to be #1. He did win the 1975 Bazooka bubble blowing contest!
2. The photographer has just asked, "Which one of you guys is Kurt Bevacqua?"
3. Finishing up his "white glove" inspection of the cleanliness of his bat. (That bat boy is in a heap of trouble.) Whatever the reason, Kurt has managed to grace Stats-on-the-Back twice. Here is a list of 2-timers on the site (like you care):
1. Christy Mathewson (original HOFer)
2. Floyd Bannister (He cheated by appearing on Tom Seaver's card)
3. Tito Fuentes (I got my first Tito disc in the mail. I will share it later)
4. David Wright
5. Darryl Strawberry
7. Kenny Lofton
8. Mark Davis (not a HOFer)
9. Mike Piazza (future HOFer. I hope he goes in as a Met)
10. Pete Rose (HOFer???)
11. Hank Aaron (The extra A in his name is for AWESOME)
12. Gary Carter (HOF fro)

It's a little Mets-centric but that's the way I like it. One game up on the Phillies!

Next up: Rafael keeps the kids safe?
Posted by mmosley at 7:50 AM 3 comments:

Patricia and Lucy have made me notice the guys on cards who actually look like they enjoy playing the game we all wish we were good enough to play. Here is the smile of the the 1985 Donruss set: John Montefusco had plenty of reasons to smile:

1. Cool nickname: The Count (as in Count of Montefusco)

5. Back in the Bigs after a neck injury from a car crash.

Now for the biggest frowner and most ignorant of 1985 Donruss: Bob Knepper! Bob Knepper is an angry woman-hater. Check out these choice words from Knepper:

"I just don’t think a woman should be an umpire. There are certain things a
woman shouldn’t be and an umpire is one of them. It’s a physical thing. God
created women to be feminine. I don’t think they should be competing with men.
It has nothing to do with her ability. I don’t think women should be in any
position of leadership. I don’t think they should be presidents or politicians.
I think women were created not in an inferior position, but in a role of
submission to men. You can be a woman umpire if you want, but that doesn’t mean
it’s right. You can be a homosexual if you want, but that doesn’t mean that’s
right either."

Bob is not an enlightened guy. He pitched great the year he made these remarks. He made the All-Star team. That's too bad. Maybe he was frowning because nobody likes him.

Montefusco will be honored here with the display of his Stats on the Back. Knepper will not be so honored. Boo Bob Knepper. Hooray Montefusco!!!

Apologies to Beaker for being compared to Knepper.

Ken Berry was a member of the Chicago White Sox in 1970. He was traded after the season to the California Angels. (Can you remember a simpler time when they were not the Anaheim Angels and definitely not the LA Angels of Anaheim. Ugh!) Topps is well known for airbrushing hats and jerseys even back in the 70's. They just didn't try very hard on Berry's 1971 Topps card. Instead of adding a mis-sized Angels logo or even just some blue paint, they went with the black pen approach. Ken also has a GIANT hoop earring in his right ear. 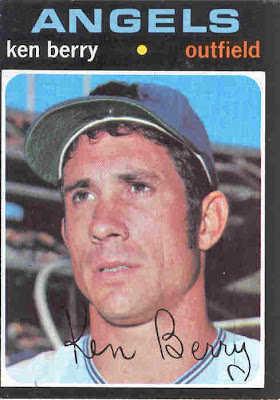 The back of his card says he was an excellent fielder. He won 2 Gold Gloves, including 1 in 1970 for the Sox. 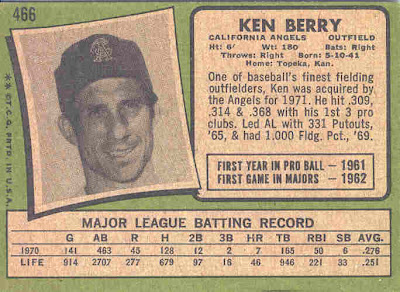 A quick internet search reveals there was also a hockey playing Ken Berry and an acting & dancing Ken Berry. The acting Berry starred as Vinton Harper on Mama's Family. He also appeared in Mayberry, RFD and Herbie Rides Again. The hockey playing Berry scored 8 career goals and tallied 10 assists in the NHL.

After rating each Ken Berry's career, I have ordered them according to their career success:
1. Ken Berry
2. Ken Berry
3. Ken Berry

I remember in little league when their were only one or two good helmets from the big green army bag of equipment. The rest were too big, too small, or had no padding, therefore hurt to wear. The "too big" problem was easy to remedy. Just wear your cap under the helmet. Perfect fit!

Major leaguers each have their own helmet. It should fit sans cap. Here is Al Oliver sporting the double hat look for the Phils: And here's Harold Baines with the same double hattage that I used when I was in little league. Its a shame these too really good players couldn't get one of the good helmets from the bag. Schmidt and Fisk were the stars of their teams. Maybe they always got the good helmets. Oliver only spent half of 1984 wearing the bergandy pin stripes. He was involved in lots of trades, including a crazy 4-team trade in 1977. (the trade involved shuld-be HOFer Bert Blyleven and the New York Mets. Check it out here.) Oliver was a 7-time all-star and received MVP votes 10 different years. His best year came in 1982 with the Montreal Expos. He won a World Series with the 1971 Pirates. Nickname: Scoop! Harold Baines, along with Oliver, belongs in the Hall of Very Good (Sorry Steve!). He played and produced for 22 seasons. He routinely hit over 20 HRs and batted over .290. He finished his career with 384 Hrs and 2866 hits. His hometown celebrates Harold Baines Day every January 9.

Two nice players and one cool memory of Little League!

Posted by mmosley at 8:32 AM No comments:

Fernando Valenzuela was Dwight Gooden before Dr. K was himself. Fernando-mania swept the
nation in 1981. I was only 5 so I had to wait for Doc to go nutty over baseball. If I was a little older I might have become a Dodger fan.

Valenzuela was a phenom in 1981. He won the ROY and Cy Young and finished 5th in MVP voting. He had an advantage though. As this 1985 Donruss card proves, Fernando could move the ball with his eyes! Eight shutouts! Wow. Nobody gets that many in a year. Brandon Webb led the league last year with 3. Dontrelle is the last pitcher to get 5 in a year. If D-Train could move the ball with his eyes in 2005, he certainly cannot do it anymore . After starting his career with 6 straight All-Star game appearances, Valenzuela cooled off and became a pretty average pitcher for a lot of years. He did pitch a no-hitter in 1990 on the same day Dave Stewart threw one. Two no-hitters in the same day only happened one other day, April 22. 1898.

Fernando pitched and played some first base in the Mexican League in 2005 and 2006. He also coached Team Mexico in the World Baseball Classic. I think he made the USA lose with his eyes!

Next Up: Double the Hats

The 1984 Brewers were just 2 years removed from two straight playoff appearances including an AL Championship in 1982. I grew up with Milwaukee as an AL team but now its seems a little odd. The 84 team was terrible, winning just 67 games. Their pitching staff included 2 HOFers. They just happened to be near the end of their impressive careers. But this post is not about how bad the staff was at pitching, its about how bad they were at grooming themselves.

Rollie Fingers was one of the first great closers. He saved 37 games in 1978 with the Padres and saves weren't even cool back then. Fingers was still pretty great in 1984. He saved 23 games with a tidy 1.96 ERA. And his 'stache was even better. Look at the curve. The left side of his hair was getting out of hand but the handle-bars were perfect. Rollie can be seen every year hitting homeruns in the All-Star celebrity softball game. Jaime Cocanower led the Brewers in loses with 16. He would only last 4 seasons even after a dominating debut in 1983. He sported the fro, tucked neatly into his Brewers hat. Can I just say that the Brewers have the coolest logo in all of baseball. It's an M and a B that go together to form a baseball glove. BRILLIANT! Pete Ladd pitched for 6 years. He only played 1 year in the NL and batted .000, going 0 for 1 in his career. But the winged locks and the red-tinted mustache make up for any defeciences at the plate. Peter was a fine looking man. Willie Lozado wasn't a pitcher, but he had to represent the latino version of the fro/'stache combo made so famous by Cocanower and Ladd. Lozado had an average major league bat but didn't field well. 1984 was his only taste of that powder blue Brewer polyester. Bob McClure stuck around the big leagues for 19 seasons. He almost didn't make it through the 84 season until he reluctantly agreed to grow that soul patch. No self respecting Brewer pitcher would be clean-cut and only have a regular mustache. One might ask why the same rules didn't apply to Mike Caldwell. There are two reasons:
1. Caldwell is from my hometown, Tarboro. NC. Even though Tarboro has had several players make the NFL, there is still a sign that reads: Welcome to Tarboro. Home of Mike Caldwell.
2. Check out the chest hair and gold chain.
Caldwell was great in 1978, finishing 2nd behind Guidry in Cy Young voting. He also won 2 games in the 1982 World Series. Don Sutton bookends this bunch with yet another HOFer. He is pictured here, expertly drawn by Dick Perez, with Princess Leia hair. Sutton won over 300 games and amassed over 3500 k's in his career. He did color commentary for TBS until 2006. Now you can see him do Nationals games if your cable company allows you to watch MASN. Here are the Stats on the Back for all you nutty Brewers fans: I hope you enjoyed this raggedy version of Milwaukee's best. The current Brew Crew has hit a snag as of late. They have lost 7 of 9 and Prince took a swipe at Parra in the dugout yesterday. It's too bad CC and Sheets can't pitch everyday. I have nothing against the Brewers, but if they fall off enough to help my Mets win a wildcard, that would be OK with me.

Next Up: Fernandomania!
Posted by mmosley at 9:58 PM 3 comments: