Did you know that Dale Murphy was a Seattle Mariner in 1980? Neither did I until I found this card. 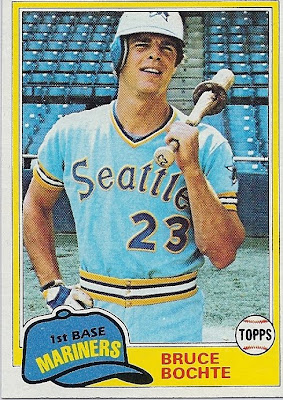 Bochte was a one time All-Star while the Murph won 2 MVPs and was an early 80's baseball god.

Bochte is an agnostic while Murphy is a Morman.

Bochte sat out the 1983 season in protest of rising salaries ruining the game while Murphy made 1.3 million in 1983.

Neither is in the Hall of Fame.
Posted by mmosley at 8:14 PM 3 comments: 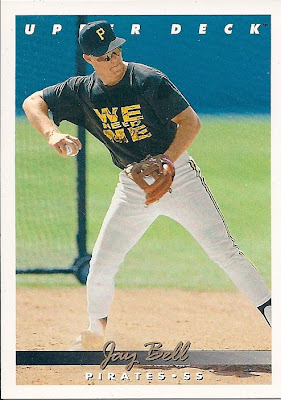 Bell is taking infield, wearing a t-shirt that reads "WE NEED ME". The "WE" must refer to the Pittsburgh Pirates. The 1992 Pirates won 96 games and eventually lost to the Atlanta Braves in the postseason. Jay Bell was arguably the 3rd best position player for the Pirates that year, behind Bonds and Van Slyke. In 1993, Bell was the best position player and the Pirates finished 5th in the NL East, winning only 75 games. So while the Pirates "needed" Jay Bell, they didn't need him nearly as much as they needed BARRY BONDS!
Posted by mmosley at 7:05 PM No comments:

The NL won, the NL won! I fell asleep in the recliner before any runs scored but the NL won! I believe that my willingness to cheer for Braves on this one day helped the Senior Circuit prevail.

There were 6 six entries that met the criteria of not having made an All-Star team:
SpastikMooss said...the best active player to never play in an all star game is Eric Chavez
k said...I'd say the best player never to make the all-star game is Don Larsen.
Don said...I will nominate Mickey Stanley.
TheBrooklynMet said...I am going to go with Kurt Gibson.
Dusto said...I'm going to throw a vote in for Tim Salmon.gcrl said...clearly it is eric karros.

The best player to never be an All-Star (at least from these candidates) is Kirk Gibson.

I'll dig up something to send to TheBrooklynMet.
Posted by mmosley at 8:41 AM 2 comments:

The All-Star game is next week. Could this be the year the NL rises above the AL dominance?

In honor of the big game, I will have a little contest. Winner gets cards of their favorite team, blah-blah, etc. I don't know what, but its FREE!

Answer the following question:
Who is the best player to never be an MLB All-Star?
Remember:
1. The All-Star game started in 1933. Don't choose someone who played before then or who had there best years before then.
2. Do your research and give me some rationale. Your strong opinion may sway my decision.
3. I will choose the "correct" answer from all entries. (I don't know the answer but I do know that it is not Rick Dempsey.)
4. First person to name each player has dibs on that player.
5. Entry deadline is the first pitch of the 2010 All-Star game.