The hot corner stirs some debate. Brooks Robinson is the best defensive 3rd baseman of all time, but does that get him in the top 3? No one mentioned Bill Mazeroski when debating 2nd Base! Here's my list: 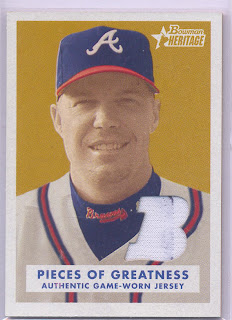 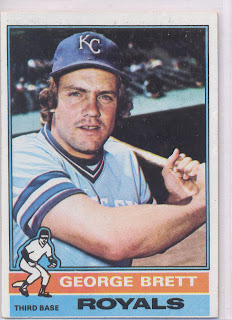 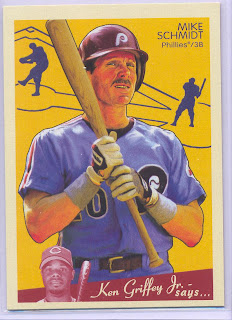 Current players who could be in the conversation:
David Wright: He's 26, has 4 All-Star games, 3 top-tens in MVP, 2 questionable Gold Gloves. He's the face of the Mets. Too bad Citi Field has sucked all his power away.

Alex Rodriguez: When he has played more games at the hot corner than at short, he'll go up in the ranks for sure.

It's on the the outfield next. But not before a little more Tito love!
Posted by mmosley at 9:19 AM 4 comments:

Shortstop is an interesting position. In little league, its where all the best players play (while they are not pitching or occasionally roaming center field). And for a while, it was where weak bats with outstanding gloves played. And then there was ARod/Jeter/Garciaparra. With a few exceptions, SS has once again become a light hitting position in the big leagues. Here are my picks for the best Shortstops in history: 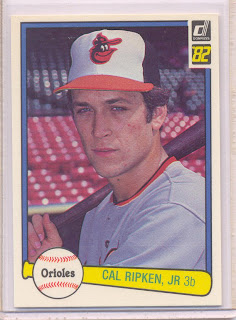 Ripken broke the light-hitting shortstop mold of the 70's. He could hit. And was underrated as a fielder. He threw the ball so effortlessly to first. He went to 19 straight All-Star games, won 2 MVPs, and ROY. He hit 431 HRs and had over 3000 hits. And there was the games played streak. Not bad for a the number three spot. 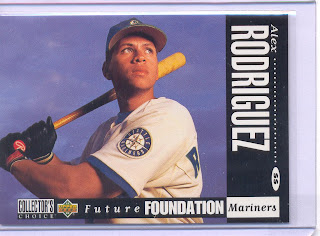 You might call foul on this one for a variety of reasons. He has played more games at SS than at 3rd base. He also won 2 Gold Gloves for the two seasons prior to coming to the Yankees. He should be playing shortsop right now instead of that Jeter guy. He has won 3 MVPs, 9 top 10's in MVP voting, and 12 All-Star selections. He has a career OPS+ of 147 and 570 HR and counting. I hate that he did steroids but I can't leave him off my list because of it. I may have sub-consciously dropped him from the top spot because of them (or it may have been all those games at 3rd base). I figure he will be the most controversial pick. 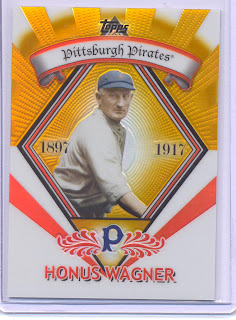 To many collectors, Wagner is simply the face on the most famous sports card ever. He was a great player. He batted .327, with a .391 OBP, and an OPS+ of 150 for his career. He did play in the teens, but he ranks in the top 10 in career hits, doubles, triples, and stolen bases. Rodriguez is hot on his heels for the top spot but maybe not as a shortstop. Wagner was too good to be ignored.

Others in the conversation:

Cap'n Jeter - Jeter is a fantastic player. He will certainly reach 3000 hits, all in pinstripes. His 4 rings and .304 postseason average will take him straight to Cooperstown. But he is not the best shortstop on his own team. Sorry Yankee fans.

Hanley Ramirez - He's the only current SS that can even be considered. He is 25 and has won a ROY and followed it with 2 outstanding seasons. He is playing even better this year. His average is up, strikeouts are down, and his power numbers are holding steady. Too bad he is stuck in Florida. Ramirez doesn't get the credit he deserves. I don't think he'll be top-three all-time but you never know. He certainly has the potential.

As usual, what do you think?

Send your address if you requested cards in the giveaway!!!
I know that ALL of you have been anxiously awaiting the next Tito Fuentes post and here it is. This time you are lucky enough to get double the Tito, thanks to the In Action cards featured in 1972 Topps. We'll start with the regular card #427: 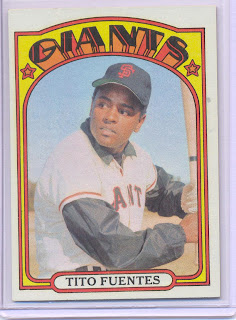 1972 Topps is as 7o's a design as you can get. GIANTS explodes from the top of the card, along with a few stars. The colored borders are almost psychodelic. Tito is wearing a collared, warm-up jacket under his uniform. Wonder why no one wears these anymore? I think I could probably come up with a few reasons. He is posing as a lefthanded batter. (He is a switch-hitting right-hander. Solid fake posing from Mr.Fuentes. 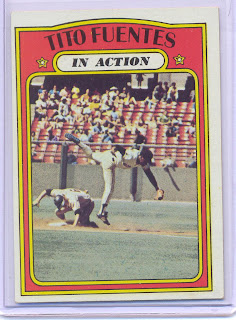 This card deserves the a Dinged Corners' special rating. Tito is mid-air. He has just jumped over or fell over an opposing runner. There is a whole section of relaxed fans in the stands. 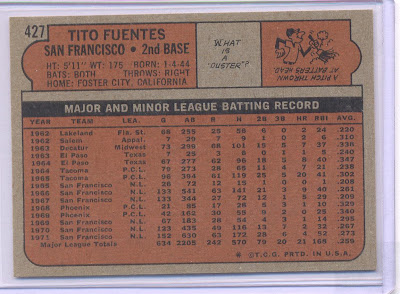 Here's what we learn:
1.Fuentes had an excellent 1971 season in San Francisco. 172 hits, a 273 avg, and 28 doubles.
2. Minor league stats back to 1962. He started playing pro ball at age 18. I'm still impresses by his epic 1965 season in Tacoma.
3. A "duster" is a pitch thrown at a batter's head. This fun factoid is accompanied by a cartoon of a ballplayer actually dusting with a feather duster. How clever!

More fun Tito facts on the back of the In Action card? 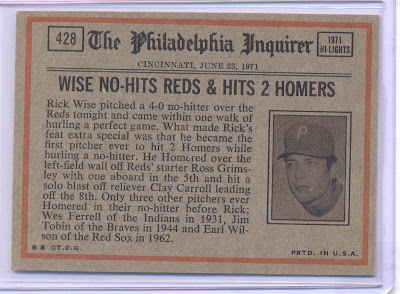 What? This is OUTRAGEOUS! Rick Wise info polluting the sacred card back of hero Tito Fuentes. We do learn that Wise threw a no-no while blasting not one, but two homeruns to help himself. The odd thing is that Wise has his own IA card in 1972 Topps. The IA backs contained season highlights, league leaders, and puzzle pieces. As possibly the only Tito Fuentes collector, the lack of new Titonean knowledge is more than a little disappointing. Kudos to Rick for his impressive 1971 highlight. Boo Topps for the slight to Mr.Fuentes.

Stay tuned for more Tito Fuentes! AND SEND ME YOUR ADDRESS. 19 packages shipped today!
Posted by mmosley at 9:08 PM 1 comment: