Despite the general theme of this blog, I do buy new cards from time to time. I usually pick up cards from Target, although I did see my first pack searcher there last week. I wanted to say something that would shame him on the spot but I didn't. He didn't look tough or anything, I just assumed he had long since made peace with his own villainy.

My brother, the non-contributing contributor to this blog offered a proposition. Lets split a box of 2008 Topps Allen & Ginter and sell anything we don't want. I was up for it but warned that we probably wouldn't make any of our money back. But that isn't really the point, is it? He secured the box from an ebay seller for $86 including shipping.

We met on Monday to divvy the packs and rip away. Here a few highlights and lowlights of out box.

We were hoping for a nice N43 card but we got this lousy history cabinet card. 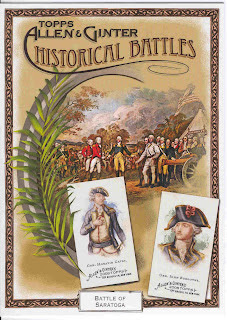 Not a great start but I was still excited. The first card out of a pack was this Catastrophe on Cardboard (I haven't done one of those post since the early days). I can't decide who was more disappointed: My brother for pulling this card, Dan for losing so many races where he was the favorite, or Dan's mother for seeing her son in that outfit. 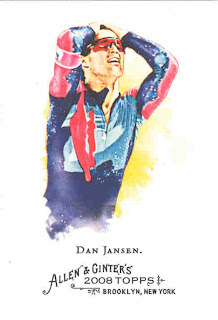 That would be the end of any and all disappointment. We had a blast opening each pack and sharing our hits and misses. Compare these two cards: 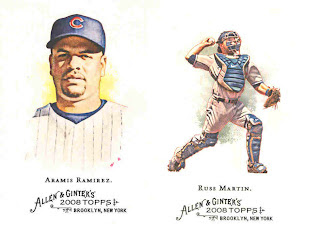 Aramis got the classic, no action shot because our "old" cameras can't do that while Russ got the most awesome looking card ever. Every action shot on these A&G cards is BASEBALL CARDTASTIC! How about making '88 Score proud by having all action shots next year?

My favorite card in my half of the box was this Christy Mathewson mini. It looks great and will go well with my T-206 Mathewson I bought when I was a kid. The Minty Beans card is pretty sweet too. I am not going to try and figure out the code but I am definitely a Team Orange fan. 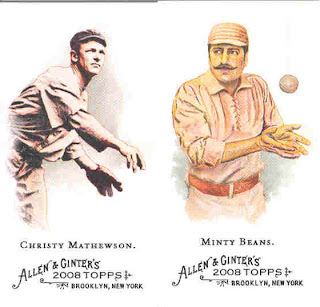 My brother pulled a Johnny Damon bat early in the break. I later 1-uped him when I pulled a Pudge bat relic. Then he "brought the box down" by pulling this extra cool Serena Williams autograph: 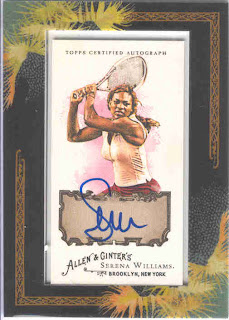 This one is going on e-bay! How cool would it be to recoup some cash for some UD masterpieces later in the year. Serena made my late pull of a Brian Roberts bat seem silly. My brother and I had a great time opening this box. I only got half the cards but it was half the price and I got some QT with my bro.

Apologies to Cueto, Kershaw, Wright, Picasso, and that Rubik's cube champ. Your cards were nice too!

Next Up: Mets Update, current season and the long awaited want list!
Posted by mmosley at 1:23 PM 1 comment:


You might notice that they are both 6'1'', probably a common height for major league pitchers. Floyd is left-handed while Tom is arguably the best right-handed pitcher of the modern era. (There is this other guy named Clemens who could fit that description if only he didn't fit some other not-so-nice descriptions.) Floyd's highlights include leading the White Sox in K's while Tom's highlights include 3 CY Young Awards, a Rookie of the Year Award, and 8 All-Star selections. So obviously it was hard to tell the two apart: 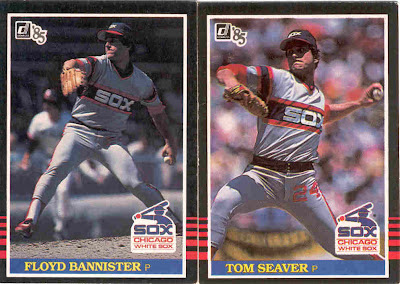 That number 24, emblazoned on Bannister's pant legs wasn't enough to sway Donruss photographers away from thinking they had indeed caught a glimpse of the elusive Tom Seaver.

In his senior season of high school, Bannister went 15-0, allowing 0 earned runs in 112 innings. WOW. His three sons all play baseball, including Brian, who struggling with the KC Royals.

Seaver has 300 wins, 3000 K's, and later this year, a bottle of wine from his own vineyards, a cabernet named Seaver!

Summer school is over and my 1985 Donruss tribute is wanting some attention.

To honor 85 Donruss and the upcoming summer Olympics, I give you synchronized swimming! You know, the sport where make-up clad women spin in unison under water in hopes of Olympic gold and immortality. Ed Sprague knows all about it: 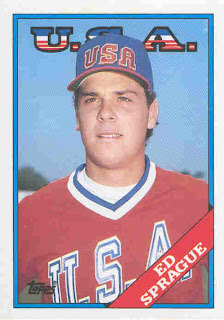 His wife controversially won gold in the 1992 Olympics in Solo Synchronized Swimming. And the controversy had nothing to do with the fact that synchronized and solo do not go together. Some miscalculation in scores was the issue. Some other athlete was awarded gold later that year. Ed himself won gold in 1988 (in Baseball, not swimming).

Baseball seems to go in and out of the favor of the IOC so you never know if baseball will be a medal sport rather than just an exhibition. Former Oakland A first baseman, Bruce Bochte, (not to be confused with former player and manger, Bruce Bochy) decided to do something about it during the 1984 Major League season.

He teamed with an unnamed AL umpire to form the first and thankfully last Synchronized Baseball duo. Here they are, perfectly synchonized: 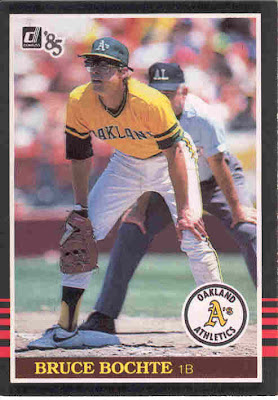 This kind of precision takes years of practice. Surprisingly, Bochte was near the end of his baseball career AND at the very end of his synchronized baseball career. It is not currently known what came of the unnamed umpire. 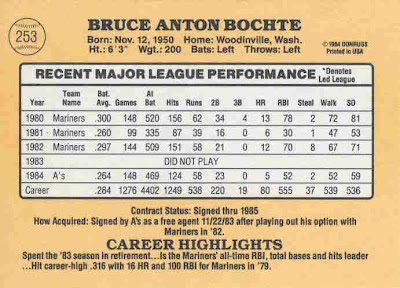 Bochte was a slightly above average career player who peaked in 1979 when he hit .316 with 16 HRs, 100 rbi, and his only All-Star appearance.

Next Up: Some other 1985 Donruss nonsense and maybe a Mets update (I'd hate to jinx them!)
Posted by mmosley at 11:15 AM No comments:

While you wait...
WONDERFUL 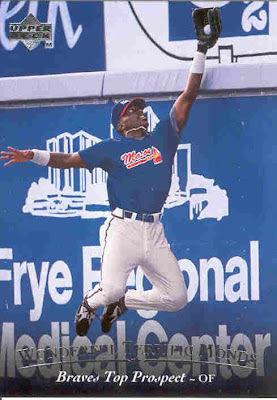 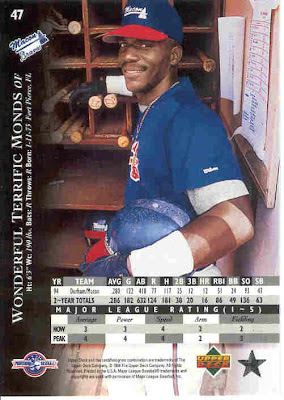 I could have gone with Uggl-y!

Its 12:45 and the All-Star game is still being played. The NL is still in the game despite Dan Uggla. Don't get me wrong, I like Dan Uggla, but not right now. This kind of game can turn him into a ridiculously good-hitting Chuck Knoblauch.

What if someone chopped off the top part of a tree, leaving the trunk, which they then painted a nice fleshy pink.

And then... (bare with me here. I am a pacifist and while I do have anger in me for the Braves, I would not do such a thing) someone also chops off Dale Murphy's head and sticks it on the aforementioned tree trunk.

Well, you would get this: 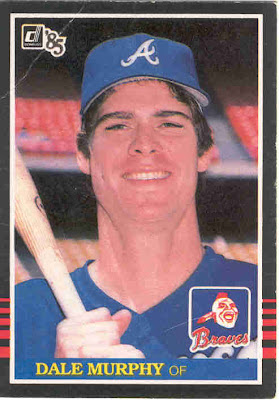 Look at that neck. Dale is smiling but his neck is not. It is saying, "I will destroy you." Obviously I translated that from the original tree trunk neck language.

Murphy was known as one of the nice guys in the league but I think he was over compensating for the ferocity of his neck.

Dale Murphy hit the first Major League home run I ever saw live. That was not enough to sway my fanship in the early 80's. The Braves sure were bad back then!

He had 7 undeniably awesome seasons, winning back-to-back MVP's in '82 and '83. He was a workhorse until injuries "Mattinglyed" him late in his career. His 30/30 season in 1983 was only the 7th in baseball history. Wow. 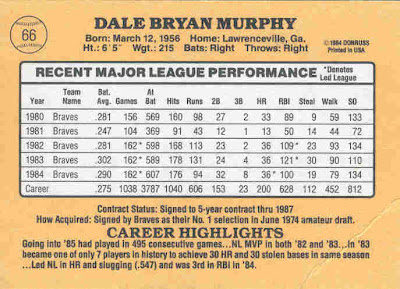 Murph is an almost HOFer. But if Jim Rice and Andre Dawson get in, then so should Murphy.
Posted by mmosley at 4:50 PM 8 comments:

Its nice to admit that we are all pretty geeky when it comes to this baseball card thing. Pictures of grown men with lots and lots of Stats on the Back have pushed us to spend our money and take up our time sorting and resorting. (and even more resorting if we are talking about me.)
Since January, a growing number of us have found and taken up shop in this little corner of the interweb. A Pack a Day was the site that brought me here. I have opened a few packs on my site but then settled into MY style of commenting on this hobby. I check my RSS feeds (I have no idea what that means but they work) on a daily basis, ocassionally commenting, and soaking up the fun of collecting baseball cards.
My little page here tends to highlight cards that I like for whatever reason and the players on them. I'd like to think that I am, on occasion, mildly amusing and somewhat informative. (I love those meaningless under-zealous adjectives. They keep the expectations low.) I haven't had too much reason to complain about the current state of the hobby but I am happy some people do (assuming the card companies actually listen to them at some point.)
Whatever your reason for blogging, keep doing it. Here is my list of best reasons to blog about baseball cards:

Sheer Bliss
See Dinged Corners for all that is good and even a little holy about collecting. They do it the right way. The whole family takes part. They do have rules though!

Insanely Interesting Information
See Cardboard Junkie for the best information, especially on the old, old stuff and my least favorite Met killer, Larry Jones.
The Thrill of 80's Wax
See Awesomely Bad Wax for the packs most of us endlessly opened, searching for Gregg Jeffries, Sam Horn, and Wally Joyner. He also shows off his ever growing Relic/Auto collection.

Obsession for Your Team
See White Sox Cards for detailed coverage of every Sox game and every Fisk and Baines card. See Cincy Reds Cards for the loudest display of all that is Red. And see Indians Cards Always for Tribemania, including Indians by the numbers and rubber duckies?

The Joy of a Trade
See Baseballcardman for remembering how fun it is to trade, even if the cards are of 1980's Royals. (Hey, they did win a World Series!)
To Rule the Blogging World
See Wax Heaven for unmatched volume and insight into the pulse of everything baseball cardy. (cardy IS a word, just don't look it up) His recent retirement was positively Favre!

There are plenty more reasons to blog and certainly more that I read everyday. See the list to the right to know what I am reading.

To end this post right with some actual cards!

An homage to A Pack A Day, Stats on the Back style: 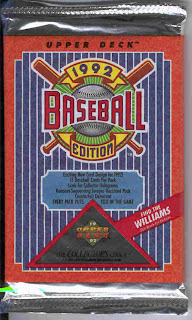 A pack of 1992 Upper Deck. a mere 3 years from their epic first release of 1989. Might I pull a Ted Williams Auto? Or maybe just a Ted Williams Insert?

Nope!!! But I did get this Spike Owen: 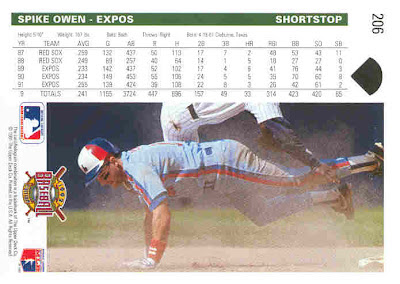 In 1991, Spike hit a mundane .255 with 3 home runs. But he probably made up for it with his speed, right? No, only 2 stolen bases. Spike was, in fact, a ringer, signed by the Expos for the annual, July 4th, MLB BARBECUE and WHEEL BARROW RACE event. The Upper Deck photographers impressively caught Owen practicing his technique. As you can see, he has just "barrowed" over some of his competition.