Jim Abbott, who only had one hand, pitched for 1o seasons in the big leagues, including one in the pitcher-hitting National League. Abbott's 1991 Upper Deck card features him bunting 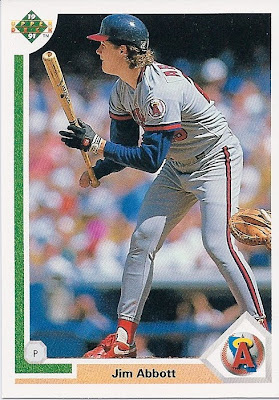 And the back of the card shows him on base, different at-bat (check the batting gloves): 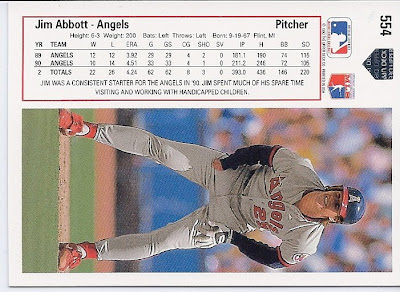 In Abbott's last season, he pitched for the Milwaukee Brewers and got to the plate 24 times. He collected two hits (both singles), three sacrifice bunts, and three rbi.

Could be a sliding glove. They didn't have interleague play, so that had to be a spring game against the Dodgers. The last spring game of the year usually at big league parks.

Abbott's always been one of MB's feel-good stories, and I like that. Seriously, a one-armed guy throwing a no-hitter?!

Just found this post in my sidebar - very cool card! Abbott always seemed like such an awesome guy.