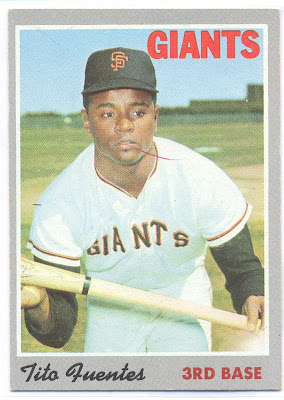 He's bunting but he's not that into it. Maybe it's payback on Topps for leaving him out in 1968. Also notice that he has moved from the middle of the infield to the HOT corner.

And now flip to the STATS-ON-THE-BACK: 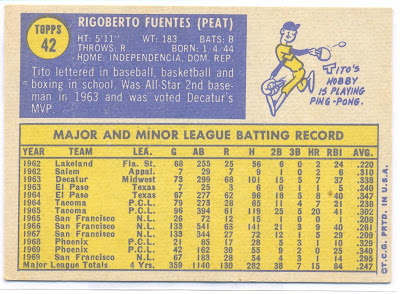 Here is the new info we now know:
1. Second last name: Peat?
2. Lettered in baseball, basketball, and Boxing. What high school has varsity boxing?
3. Anoher Hobby: Ping Pong. While not coaching little league, Tito plays table tennis. Multi-talented! Don't you think it's unfair that Athletes are so often gifted in multiple sports. Yes, Ping Pong is a sport.
4. Tito earned his roster spot back with some nice stats in Phoenix. He didn't play much so maybe he was actually injured.

If I had a baby name list, Rigoberto would be at the top.