Hey Astros! What do you think of those sunshiny uniforms? 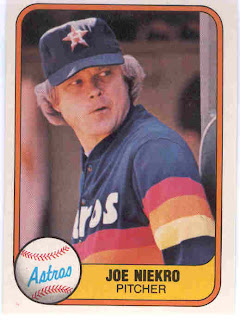 "Errrrrr... I don't think I'm supposed to answer that. I mean, we are the Astros, right? And not the Candy Corns? Nolan doesn't seem to mind wearing it so why should I complain? I did have a better year than Ryan in 1980. What was the question?" 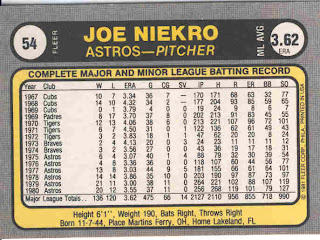 Niekro won 221 games in his knuckle-filled career. He is best known for the nail file incident and for being the brother of fellow knuckler, Phil niekro. Joe hit his only career homerun off of his brother in 1976.

Hey Jeff Leonard! Same question. What about those unis? 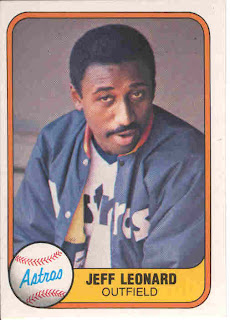 "I'm gonna tell you a little secret. Lean in close. I really don't care because in 9 years, I'm going to hit 24 homeruns and each time run the bases with "one flap down." Little leaguers and wiffle ballers everywhere will hold one arm still in honor of me...and Bob Dole!"

Leonard was Kevin Bass with a little more style.

Factoid: The Astros owner named the Dome, then the team. Therefore their new name should be the Juice Boxes!
Posted by mmosley at 6:01 PM

"Lean in close." Love it. For whatever reason, we've never seen those cards before.

As for the factoid, Mr. M, your logic is impeccable.