It's hard to remember when the Yankees were not good. In 1980 they won the AL East. In 1982, they won the AL Pennant. Then they failed to make the playoffs for 12 years in a row before 14 straight in the positive direction. Will 2008 mean another streak for the Yankees? Probably not. Here are a few Yankees from 1980. 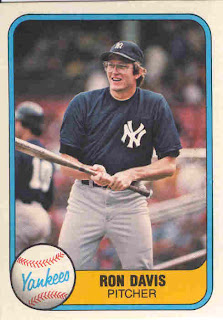 Ron doesn't look comfortable with that bat in his hands. In fact, he was 0-6 in his career. Never got on base. The odd thing is, he probably raked in High School and College. It amazing how major league pitchers look so bad hitting when most were great hitters when they were younger. 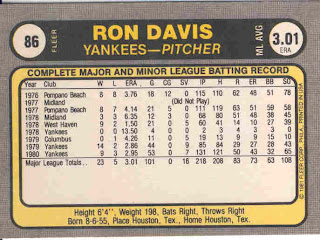 Despite his batting stats and stance, Davis enjoyed a really nice and unusual rookie season. His record was 14-2 in 1979. He never started a game yet won 14 decisions. The Yankees picked him up from the Cubs as a player to be named later for pitcher Ken Holtzman. Davis owns too interesting records: Yankee team record for Most Consecutive K's in a game (8) and Major League record Most Blown Saves in a season (14).

Before New Edition and before Whitney:
Bobby Brown 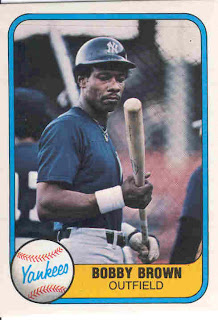 Bobby wonders how bad-hitting, Ron Davis got his hands on his bat. He knew then and there that his career in baseball was coming to an end. He would have to get younger, join a boy band, and marry a diva.

Like Davis, Bobby Brown was also a player to be named later. His name is not actually Bobby. It's Rogers Lee Brown. 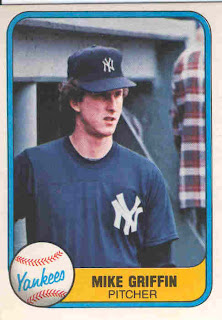 You know those Topps factory sets you can buy at Target that contain bits of Mickey Mantle's wardrobe. You can see the plaid shirt worn by the Mick in the background of this Mike Griffin card. I wonder what Mantle was doing at the park that day.

Mike Griffin makes it a perfect 3 for 3 in players to be named later. He was the player named later 3 times in 2 years.
Posted by mmosley at 6:57 PM