Who says the Mets aren't tough enough to get into the playoffs?

But they would be tough enough if they brought back
DAVE GALLAGHER:
FOREARM SHIVERer 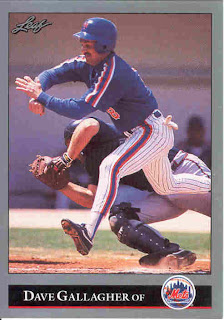 Why do they call it a forearm shiver? Ask that catcher who shakes every time a player rounds third base.

Dave was arguably the best AL Rookie in 1988 with the Chicago White Sox but was beat out by Walt Weiss, who won the award with a HOT end-of-1987 and a below average 1988. Gallagher was never better than he was in 1988. Nowadays, he runs Dave Gallagher's All-American Baseball Academy.
Posted by mmosley at 9:44 PM

That is a great photo. I have tons of that old Leaf crap, but I don't remember that card for some reason.