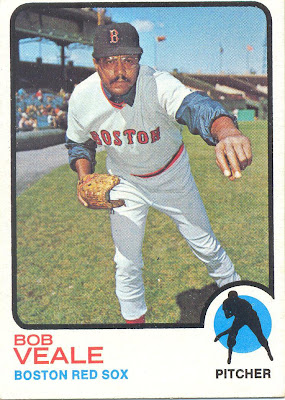 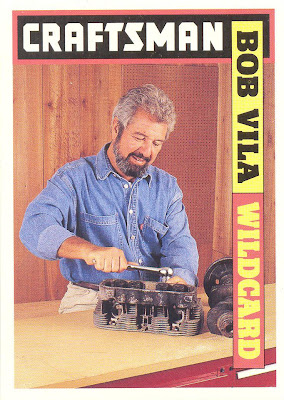 Who had the better career? Leave a comment, giving your choice and your reasoning. On Friday, I'll select the best response and send you a prize pack including your very own Bob Vila card!
Posted by mmosley at 9:22 PM

I'll get out of the gate early and set the bar low.

Anybody can get on a TV show, especially a network sitcom. However, winning a World Series ring is an amazing accomplishment, even if you didn't pitch much and were along for the ride. I'll go with Bob Veale anyday.

Bob Veale -- 13 year career with 2 teams, 255 starts and 20 shutouts is a good run for a starting pitcher, although he faded over the last 4 years.

Bob Vila -- finally cancelled after 28 years spanning at least 3 different shows ("This Old House", "Home Again with Bob Vila" and "Bob Vila"), but significant ratings decline in latter years, primarily because of competing with the type of show he helped launch.

Besides, Veale's the most likely of the Bobs to still have 10 fingers. There are only 750 people to have jobs on active major league rosters at any time, a small percentage of which will last 13 years. There are probably that many handymen in my Yellow Pages.

it's veale. bob vila's career is tainted by the fact that he was fired by pbs way back in 1989 for accepting a promotional gig with sears. tainted.

As a fan of the Yankees, I've got to go with Bob Veale. But what about the incriminating photo of Veale in a Red Sox uniform? Not good, but not a dealbreaker for him. You see, Veale did his best work in Pittsburgh, not Boston. On the other hand, Bob Vila forsook sunny Miami and moved to Boston (?) where among other notable accomplishments he founded the Boston Architectural Center. So as I see it, Vila did more to help Boston than Veale ever did. Given no other connections to the two, Vila is hereby disqualified.

PS. For those unswayed by my anti-Boston logic, I share this story from the Baseball Almanac: "April 12, 1994, at Rickwood Field, the nation's oldest surviving professional ballpark, in Birmingham, Ala. On the set of Ron Shelton's great screen bio, 'Cobb,' I encounter two local former ballplayers serving as advisors: Harry 'The Hat' Walker and Bob Veale. I always had heard that Veale was the one who said, 'Good pitching can stop good hitting every time. And vice versa.' I ask him, 'Mr. Veale, are you the one who said Good ...' He cut me off with, 'Yes, I am.'" - Sportswriter Allen Berra in My Most Memorable Baseball Moments (Salon : July 26, 2002)
Veale deserves to win on the strength of his quotability alone!

Follow me here.....If Yankee Stadium was the House that Ruth Built, and Babe Ruth being one of the best ever. Just think how many houses Vila built. More than Ruth I'm sure. Therefore, I have to give it to Vila. It's funny that both of them are pictured pretending to do their job.

By the way I received the package of Cubs I was able to save, and all I can say is WOW and THANKS!

Vila soiled the sanctity that is public television by accepting commercial endorsements. For that he shall pay. FOREVAR.

This is the greatest debate ever.