When I think of the Red Sox, two things immediately come to mind, The Green Monster and Jack Clark.

In 1992, Topps got it right by photographing the Red Sox legend in front of the iconic left field wall: 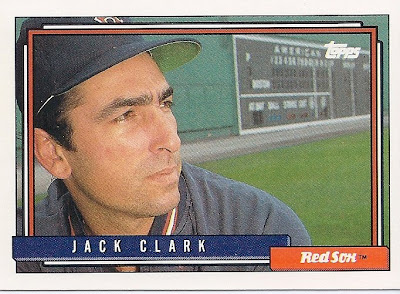 Clark was known for his slick fielding, his ability to stay injury free, and for getting along with teammates.


Wait a minute. Jack Clark hacked my blog and wrote this ridiculous post. Everything not about the Green Monster is FALSE.


Here are some Stats on the Back! 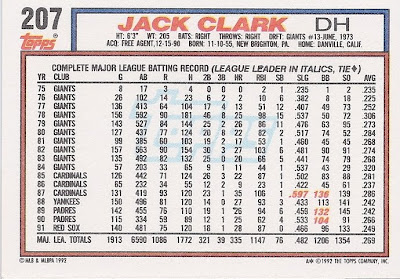 Jack Clark feuded with most every star he played with. He and Tony Gwynn did NOT appreciate each other's approach to the game. Clark fussed that Gwynn hit to protect his average, not win games. Gwynn argued that the team's #4 hitter should not walk so much (Clark led the league in walks in both seasons with the Padres.).

According to Baseball Reference's WAR statistic, Clark was more valuable than Gwynn in 1989 and 1990.
Posted by mmosley at 8:23 PM